№9 in the hotel rating Kemer
8.5 Number
8.6 Service
9.1 Purity
8.3 Nutrition
8.4 Infrastructure
The Club Boran Mare Beach Hotel was opened in 1994, the last renovation took place in 2018 (the rooms and the general area of ​​the hotel were renovated). The hotel is located on the seashore, is a complex of two-story and three-story buildings and bungalows, surrounded by pine forests. Suitable for families.More →
Reviews 110

There by the pool there are pillars with signs of different cities of the world, I asked to make and nail Mukachevo, the main animator promised to do. 2 days before departure. When I was asked to leave the hotel if there was anything I didn't like, I said I promised and didn't do it. The girl administrator called somewhere and told me to go to the pool, I approached and they came with a ready, painted and dried sign.
I thought they wouldn't, and they did just didn't see me to nail together. I apologize to them, they are well done.
Large selection of food, several types of meat, fish every day. In the morning and porridge and omelets to choose from, salads of more than 10 species, figs, olives, dried apricots, lots of cheese, yogurt with various fruits, jams of 5 types. Of fruits grapes, apples, plums, oranges, tangerines. Baklava 5-7 species, different pies. Bread rolls, wonderful breads. Sea bass at the a la carte restaurant was the best I've ever eaten. The food is very good. I overeat there. Medium quality wine, beer. There is plenty of bottled water everywhere.
Internet is free to catch almost anywhere in the territory, the speed is sufficient for a movie online.
I want to thank everyone who makes our holiday enjoyable.

The first thing that positively surprised us was the arrival at the hotel itself. We arrived at the hotel at six o'clock in the morning, went into the lobby, did some paperwork. After that, I asked that there was no first floor and we were immediately settled. Literally 15 minutes passed from the moment of arrival and entry into the room - this is the level!

Further, everything was at a high level: the food is delicious, the territory is very clean, and the animation is unobtrusive, but very professional!! ! The hotel staff is very pleasant, almost everyone speaks Russian.

We were very pleased with our stay in this hotel, despite the fact that this is not the first time in Turkey!

Club Boran Mare Beach 5 - a hotel you want to return to!

The animation is just great. From 10 am the club dance begins, then all sorts of games (bocha, water polo, jengo, archery). Animation pays attention to everyone. Also, a kids club is open in the morning, children also play all day (except for lunch) in different games and every evening there is a mini disco. For adults every evening a show, then a disco. Respect to all animation.
The territory is well-groomed, Wi-Fi throughout, 3 bars, a snack bar, table tennis and football, a large swimming pool, a jacuzzi and a pool with slides on schedule. Also, you can take ice cream all day long and there is a corner of cakes. Plenty of space on the beach, comfortable sunbeds. There is a pontoon on the water and also in the water to which you need to swim a little (you can jump water there). The rooms are new, they clean every day, change towels, deliver water, change the bed once a week. Towels are given out near the locker rooms, you can also not take cards in the evening, but immediately change dirty towels for clean ones in the morning. I want to come back here again, very cool hotel and cool animation.
Like You like  • 21
1 comment
Show other comments …

Is there a kids disco and is the kids club open now?
11 months ago  •  2 subscribers 1 answer

Can you tell me if there is a la carte restaurant? and children's pool approximate depth?
Is there a pool for 3 year olds?
7 years ago  •  4 subscribers 4 answers

What is the actual entrance to the water and the beach itself?
Will children be comfortable after Mirada :)
8 years ago  •  2 subscribers 3 answers

Ice cream
How many times and at what time do they serve ice cream?
8 years ago  •  2 subscribers 3 answers
More » Ask a Question
HOTEL EXPERTS
Представитель hotels 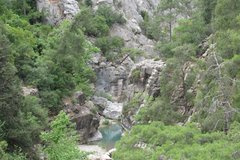 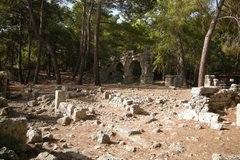 City and Bay of Phaselis

The Club Boran Mare Beach Hotel was opened in 1994, the last renovation took place in 2018 (the rooms and the general area of ​​the hotel were renovated). The hotel is located on the seashore, is a complex of two-story and three-story buildings and bungalows, surrounded by pine forests. Suitable for families.

Расположение 45 km from the airport of Antalya, 7 km from the city of Kemer, 500 m from the village of Goynuk, on the very seashore.
Описание пляжа The length of the beach is 140 m. Entry into the sea is sand, pebbles, large pebbles.
В отеле