№45 in the hotel rating Alanya
7.9 Rooms
6.8 Service
7.3 Cleanliness
8.2 Food
8.1 Amenities
The hotel is located in the resort village of Okurcalar. It was opened in 2012 and renovated in 2013. It consists of a main 7-storey building on the seashore and an additional 7-storey Theodora building (across the road, 300 m to the beach). Hotel guests can use the beach and pools of Justiniano Club Alanya. The hotel is suitable for families with children.More →
Reviews 30

This year, the vacation fell on June, and therefore, having considered several options, asking again the price for our dates in Justiniano, we did not even hesitate to choose what brought pleasant memories for us during the year. Our travel agent utm_medium=copy_link, as always, did everything professionally, and on the night of June 9-10 we went to Okurcalar. So, thanks to the travel agent, we had boarding passes on our smartphones, we weighed and checked in our luggage at the UIA counters at the Boryspil airport, went through all the controls and took off at exactly 2:25. We landed in Antalya 15 minutes earlier than planned. Bus, an hour and a half, and we are there.
While we were waiting for the settlement, we went for breakfast, and since we were given cards for towels, we went to the beach. Exactly at 12:00 we were settled. By the way, there was an opinion to try something different this year, but a repeated stay has its advantages, in particular, the fact that from the first minute upon arrival you know what to do and where to go without wasting time and effort on "exploring" the territory, the concept of the hotel . And the new one can be supplemented with excursions or exploration of the territory adjacent to the hotel. What we did: https://www.turpravda.com/tr/alanja/blog-478323.html. Although it was planned and wanted more.
So, as I began my story with the phrase that nothing has changed and not to dwell on what I described 10 months ago: https://www.turpravda.com/tr/alanja/Justiniano_Deluxe_Resort-h38490-r470594.html To do this, I will only supplement what was written in the link.
Room.
Theodore's building remained, for us, comfortable, calm, even our room this year was almost the same, only one floor above - 4, therefore, free Wi-Fi pulled worse than on the 3rd floor, although I think in the rooms even the fourth floor is closer to the pool bar should work well 1414.1413. We had room 1415. The room with the best sea view from the floor than in 2020. Doresi restaurant in Theodore this year is open only for breakfast, but just as convenient without queues, although with a smaller assortment than at the main restaurant. The team of the restaurant in Theodore is the same as in 2020, they were warmly greeted every morning, the chef, seeing us immediately without asking, cooked us scrambled eggs, and once the waiter-bartender Eda brought us scrambled eggs with peppers, tomatoes such as they cook for themselves - nice. In general, food in the main restaurant is all standard. Fish, meat, vegetables. Of the fruits were seasonal watermelons, melons, peaches, cherries.
Animation, as usual, is on top for both children and adults (I am attaching a photo with a schedule of entertainment events to the review).
An hour later we are picked up by a transfer to fly home at 17:35. Therefore, a little sad, but pleasant memories please. Would come again - yes, but not in June because the sea is cool, but in August. I would come if there were no Russians, for various reasons, including because of the smaller number of tourists, because they are mainly Ukrainians, Kazakhs, Turks, Poles, Belarusians because of the low price of the tour and not only ...Thanks to the hotel staff for created atmosphere for a good rest!

We're going for the first time. Tell me what you need to know and what to expect from a holiday in Justiniano Deluxe Resort?
4 years ago  •  6 subscribers 5 answers

Where exactly is the THEODORA building located?
The new Teodor building was opened in 2013. Where exactly was it built? In front of the reception or right behind the Resort
9 years ago  •  3 subscribers 2 answers

Please tell me which hotel is better Justiniano Deluxe Resor 5 * or Justinian
I have read all the different reviews! =(
9 years ago  •  2 subscribers 2 answers
More » Ask a Question
HOTEL EXPERTS
Similar hotels 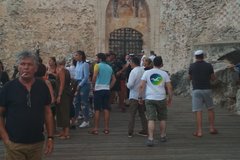 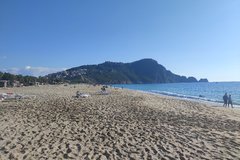 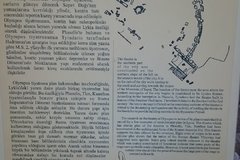 Ruins of the city of Olympos

The hotel is located in the resort village of Okurcalar. It was opened in 2012 and renovated in 2013. It consists of a main 7-storey building on the seashore and an additional 7-storey Theodora building (across the road, 300 m to the beach). Hotel guests can use the beach and pools of Justiniano Club Alanya. The hotel is suitable for families with children.

Location The hotel is located 90 km from Antalya Airport, 75 km from Alanya Airport, 35 km from Alanya and 25 km from Manavgat.
Description of the beach Own sand and pebble, 50 m from the hotel (from Theodora building to the beach - 300 m), length - 150 m, width of the beach strip - 50 m. Entrance to the sea: small pebbles. Beach towels, mattresses - free of charge.
In a hotel

2 a la carte restaurants - opening hours from 19:00-21:00, reservation required. One free visit to one of the restaurants once a week is possible. Restaurants are open from May 10 to September 20.