№2 in the hotel rating Unawatuna
8.2 Number
7.6 Service
8.1 Purity
8.4 Nutrition
7.3 Infrastructure
The Flower Garden Hotel is located on the coast of Sri Lanka, in the resort of Unawatuna. It was opened in 2000, the last renovation was carried out in 2019. Suitable for a relaxing family holiday.More →
Reviews 12

Breakfast for a triplet is even nothing, quite decent. The staff was generally delightful. Very friendly, polite and smiling. They, of course, are on their own wave, Buddhists, what can I say. They are in no hurry to go anywhere. And we, too, relaxed and were in no hurry. Go to the beach without straining for 6-7 minutes, straining - as quickly as possible. The beach is beautiful. All ten days we swam without problems, there were no strong waves. They crash on the reefs.
They were usually located on the sunbeds of the Happy Banana restaurant. It is not the cheapest, but it accepts cards. We dined there. The average check for a day with drinks and lunch for two went up to $ 20 maximum. We dined in different places, there are plenty of them everywhere for every taste. Taking into account the fact that the village is still a resort, the prices are quite acceptable.

I will not talk about excursions. You have to go and feel it yourself, since there is where to go and what to see. I can only say that we received a lot of positive emotions during the whole holiday. For those who are interested, I posted several videos about the hotel on youtube. In general, the conclusion: we are very satisfied, rested one hundred percent, the hotel really liked.

We all really liked our vacation in Sri Lanka, we left a lot of positive impressions about the country, the ocean and people. We plan to return to Sri Lanka, but as "savages".

Indeed, everything is brand new, clean, marble finishes (stairs, countertops in the room, bathroom), a lot of wood, interesting antiques in the interior - a wonderful example of colonial style!
All pieces of furniture are expensive, made of good natural materials, we did not see plastic chairs in the hotel! Which is very pleasing and makes the hotel very harmonious and stylish.
We traveled around the country for several days, so we spent the night in other hotels, there is something to compare with. It was a pleasure to return to our hotel!

The territory is well-groomed, everything is clean. The riot of nature is everywhere. Along the pool there is a mini pond with real fish and blooming lotuses! ! !
We can say that the hotel is truly a Garden of Eden!

There is a large (by the standards of Sri Lanka) swimming pool on the territory of the reception-restaurant, closer to the chalets.
And in our building on the 3rd floor there are 2 smaller pools.

Everywhere there are cozy tables, armchairs, sofas, a gazebo.

There is an Ayurvedic office, a specialist is invited by appointment.
We really enjoyed the massage! Full body massage 1h. 20 minutes. - 1800 rupees. Back massage 30 min. - 800 rupees.

Separately, about the staff of Flower Garden.
These are the most polite, caring, helpful and nice people. Any issue was resolved within minutes.
The hotel feels the warm energy of care and attention, in the best traditions of hospitality!

In the room:
hair dryer is good! ! ! : )
tea and coffee accessories (tea (3 types), coffee, milk powder, sugar are replenished daily), water - everything is free
mini bar replenished every day
balcony (there are chairs and a table)
drying for things
there is even an umbrella! ! !
cleaning every day
Flower Garden is offered by our tour operators as 3 * (although in Europe as 4 *).
If the territory of the hotel were larger, you can safely put 5 *.
We didn't find any cons!

To the beach 5 minutes walk. The hotel is located at the beginning of the entrance to the street with cafes and shops.
Nearby they sell all kinds of fruits (a large pavilion is the only one on this street).

According to our observations and feelings, for an excellent holiday in this cozy and luxurious paradise, Flower Garden is undoubtedly the best hotel in Unawatuna and, most likely, one of the best on the entire coast of Sri Lanka!
There is often a queue for his booking, which is a rarity in general.

We went to see interesting places on a rented minibus with a local driver, it turned out much cheaper and more interesting than the offers of excursions from the tour operator.
Entrance ticket prices:
Sigiriya - 3900 rupees
Polonnaruwa - 3250
Dambulla - 1300
Kandy Buddha Tooth - 1000
Pinnawala Elephants - 2000
Paradenia Bot. garden - 1100
Yala nat. park - 2720 (+ separate car rental)
Kataragama - free and loved it
You can safely take the whole day to Colombo and Kandy, there is something to see, where to wander.

Once there was a 3-day route (two nights):
Unawatuna-Colombo-Sigiriya-Polonnaruwa-Dambulla-Kandy-Paradenia-Pinnawala-U nawatuna. We paid $ 190 for a car with a driver - there were 7 seats in the car, so it was comfortable for the two of us. The price does not change depending on the number of people. If we rented a car + gasoline ourselves, it would be a little cheaper, but longer in time, since the driver is oriented perfectly, but we are not. Their roads are special. There is one speedway - to Colombo, the rest are very winding, they did not build straight lines, so it is practically impossible to accelerate, only turns. There are few pointers. It gets dark quickly - lighting, of course, is not everywhere. It was hard for the local driver to drive in the evening, and they tried to do all the crossings in the dark. So we are happy with the decision!

Tuk-tuks traveled along Galle-Unawatuna-Koggala.
Galle-Unawatuna 5 km 300-400 rupees. By the end of our trip, prices had already begun to rise to 500-700 rupees - closer to the beginning of the season. The exchange rate in mid-October was 127 rupees per 1 dollar.

Between fishermen and tukers there is an open enmity. Fishermen don’t pay tukers for the tourists they bring (they don’t want to raise prices) and sell to everyone at a good price, they are ready to bargain and give way well.
That is, if a tuker brings you to a market or a shop, then the prices are inflated to pay for the "services" of the tuker and are almost not inferior. For example, small squids, in the places where the tuker drove, were offered to us for 800 rupees, the fishermen have them for 400.
Many tukers on order to be taken to fishermen are taken to fish shops, where prices are higher and then they pretend "I didn’t understand, I thought, just for fish. " You need to follow the road and exactly name the place where you want to get off.
If you see that the tuker gets up and goes with you to the shop, the market, then say that you yourself will go and see everything. He must stay and wait for you. Unless of course you go both ways.

By the way, you can cook fresh fish in restaurants by paying for cooking. Not all are taken, but you can find. Barakuda was prepared especially tasty for us at the Pink Elephant in Unawatuna. For cooking they took 800 rupees, which included a very tasty salad.

Our holiday was a success, we liked everything. Ocean of impressions : ) and positive! We miss you already. . .

Please tell us in more detail how to order dinner if we pay for HB? Often they look for ordering from the menu - they give a separate menu or you can order
Thanks!
9 years ago  •  3 subscribers 4 answers

Rest on May, how far is the beach and what
is the beach far from the hotel?
9 years ago  •  4 subscribers 3 answers

Which number is better to choose? in the Deluxe Cabana bungalow or in the new building on the 2nd floor
There are three of us with a 5 year old. Olga ([email protected])
9 years ago  •  5 subscribers 10 answers

Will you get a beach holiday in the first week of September in Unawatuna?
Good afternoon! My husband and I gathered in Sri Lanka in the first week of September for 7 days. We were offered the city of Unawatuna, the FLOWER GARDEN 3 * hotel, but they warn that the ocean will not be calm ... Of course, we are counting on a beach holiday and going on excursions. Please tell me if it will be possible to swim in the ocean in early September, what excursions can be visited from Unawatuna and your opinion about the hotel. Thank you so much!
10 years ago  •  7 subscribers 23 answers
More » Ask a Question
HOTEL EXPERTS
Similar hotels 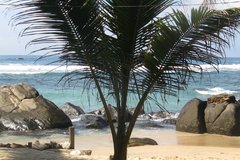 The Flower Garden Hotel is located on the coast of Sri Lanka, in the resort of Unawatuna. It was opened in 2000, the last renovation was carried out in 2019. Suitable for a relaxing family holiday.

There is a 24-hour front desk. Laundry service charges apply. Pets are allowed upon request.

The room has air conditioning, TV, minibar, coffee and tea set, balcony or terrace. Bathroom with shower and toiletries.